There was so much astounding queer country music released this year. Selecting only four nominees for each category almost felt like choosing which finger to cut off for each of our staff members, so I can’t imagine how hard this poll must have been for you.

That being said, there are some artists that have gone above and beyond this year, creating absolutely stupendous music. And you, our dear readers, voted for them.

Artist of the Year: Brandy Clark

This was no surprise to us. Coming in with 32.9% of the vote, Clark has been making waves ever since she released 12 Stories back in 2013, and she hasn’t stopped. If you’re trying to stay clear of the Brandy Clark wave, you’re going to need a bigger boat.

Clark’s most recent album, Your Life is a Record, is full of personal and endearing stories told through song, but she continued to come out with a trio of stellar singles in the past few months. Through and through, Brandy Clark is truly the Artist of the Year. Congrats, Brandy!

Album of the Year: Blue Eyes, The Harlot, The Queer, The Pusher & Me, Waylon Payne

Waylon Payne’s three-part masterpiece stole the show in Album of the Year with 35.2% of the vote. As Adeem Bingham wrote in his review of the album, Payne “compiled a jaw-dropping collection of poignant, limpid poems into one of the most audacious, assiduous albums of the year.” And now it is the album of the year. Congrats, Waylon!

Song of the Year: “Who You Thought I Was,” Brandy Clark

It makes sense that the Artist of the Year was going to show up somewhere else on this list. With 37.1% of the vote, “Who You Thought I Was” beat out Jaime Wyatt’s “Neon Cross” (34.9%) for song of the year. It’s a soul-searching, melancholy, bittersweet lament of what could have been. The clever turns of phrases mixed with the infectious melody create a song that no one can doubt is worthy of Song of the Year. Congrats again, Brandy!

British breakout star Tommy Atkins swung the new artist of the year vote with 40.2%, just barely beating out Katie Pruitt. As James Barker wrote in his review of Atkins’s debut EP, it “hits the sweet spot of resonating both with people that remember 90s country the first time around, and with LGBTQ+ people coming to terms with their identity today.” I think it’s safe to say that we’re all excited to see what he comes out with next. Congrats, Tommy!

Music Video of the Year: “Burn the Floor,” Drake Jensen

Songwriter of the Year: Brandi Carlile 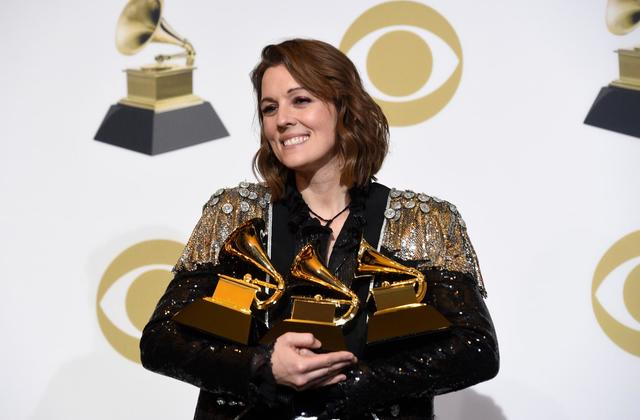 We know her. We love her. She got 33.1% of the vote. She’s Brandi Carlile, the thoughtful and innovative lyricist who snagged a GRAMMY nomination for “Crowded Table” and won songwriter of the year in the Country Queer All-Star Poll. Her latest single, “A Beautiful Noise,” a collaboration with Alicia Keys, is a “calming, melodic track that urges all of us to look inside and take control of our lives.”

Now the only question is, when is the next Highwomen album coming out? Until then, we’ll have to make do with what we’ve got. Congrats, Brandi!

Instrumentalist of the Year: Sam Rae

When you think of country instruments, you probably think of the guitar, the fiddle or the harmonica. But voters on our All-Star Poll swung in a slightly different direction when they chose Sam Rae as instrumentalist of the year with 37% of the vote.

Rae is a classically trained cellist who plays for Brandi Carlile, but this year, she came out with a stunning record of her own: Ten Thousand Years. It’s truly an instrument- and vocals-driven album, and we’re glad all her hard work paid off. Congrats, Sam!

This category was almost wrapped up from the start. While other categories fluctuated and wavered, lang held a strong lead in Lifetime Achievement Award from the start and ended up with 70.6% of the vote. She is the lesbian country icon, and our readers know it. Congrats, k.d.!

A note about inclusiveness: It’s wonderful that we’re moving the culture toward more inclusiveness of queer voices, and our winners are all thoroughly deserving. Having said that, we notice that they are all white and cis. We pledge to continue seeking out and highlighting queer BIPoC and trans artists, and, following from that, we expect to see more diversity in our nominees and thus in our winners as time goes on. – Ed.

You're a country queer - let 'em know you're here, with a CQ sticker, pin, patch, or shirt.

Country Queer is brought to you by the generous support of:

You can't pair a wine with an album, can you? Join host Aimsel Ponti and wine expert Liz Rubin in their quest to find the perfect album to go with this week's wine.

We use cookies on our website to give you the most relevant experience by remembering your preferences and repeat visits. By clicking “Accept”, you consent to the use of ALL the cookies.
Cookie settingsACCEPT
Manage consent

This website uses cookies to improve your experience while you navigate through the website. Out of these, the cookies that are categorized as necessary are stored on your browser as they are essential for the working of basic functionalities of the website. We also use third-party cookies that help us analyze and understand how you use this website. These cookies will be stored in your browser only with your consent. You also have the option to opt-out of these cookies. But opting out of some of these cookies may affect your browsing experience.
Necessary Always Enabled
Necessary cookies are absolutely essential for the website to function properly. These cookies ensure basic functionalities and security features of the website, anonymously.
Functional
Functional cookies help to perform certain functionalities like sharing the content of the website on social media platforms, collect feedbacks, and other third-party features.
Performance
Performance cookies are used to understand and analyze the key performance indexes of the website which helps in delivering a better user experience for the visitors.
Analytics
Analytical cookies are used to understand how visitors interact with the website. These cookies help provide information on metrics the number of visitors, bounce rate, traffic source, etc.
Advertisement
Advertisement cookies are used to provide visitors with relevant ads and marketing campaigns. These cookies track visitors across websites and collect information to provide customized ads.
Others
Other uncategorized cookies are those that are being analyzed and have not been classified into a category as yet.
SAVE & ACCEPT